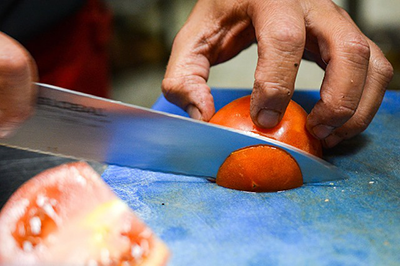 The Green Kitchen Standard is a framework which supports caterers in the kitchen by reducing their environmental impact and associated energy, water and waste, including food waste. The framework encourages caterers to monitor and measure food waste, in an effort to identify areas where they can reduce food waste, and in turn, reduce food costs.

There are many ways to reduce food waste:

Food waste is quickly being realised as a major problem for the UK, where £13 billion worth of food is thrown away each year. Not only are there carbon costs in the production, transport and preparation of the food – once in landfill – the food waste will release methane gas. Rotting food produces this greenhouse gas 21 times worse than carbon dioxide. However, despite our best efforts to reduce what we throw away, some waste is inevitable such as dropped plates or peelings. There's a new solution on the market to support with eradicating this food waste.

Most of us have heard of anaerobic digestion, where food and biological waste is sealed in a system to be reduced to fertiliser and bio-gas. However, food needs to be taken to these special plants and the process can take weeks. Aerobic digestion offers something different: an onsite system the size of a wheelie bin, that takes food and reduces it into material which can be used as soil improver or biomass fuel in 24 hours. This will not only help with the disposal of food waste, but also the elimination of greenhouse gases produced by food waste.

PKL is an organisation who have created an aerobic solution, called the Garbage Guzzler, which has been shown to help reduce waste, reduce vermin problems around waste areas and reduce the methane produced by rotting food. Carbon is also trapped in the digester and returned to the ground when it is used as a soil improver.

Sending your food waste to an aerobic digester can support you in gaining points towards you Green Kitchen Standard.